Top 5 Controversial Moments In The History Of SummerSlam

Aug 16, 2017 | By WWE Mania
With SummerSlam 2017 being at the corner, we come up with the most controversial moments that have happened in the history of this PPV event.

The 30th edition of WWE SummerSlam is all set to take place at Brooklyn City, New York for the second time in a row. The SummerSlam Live streaming will be available on WWE Network. 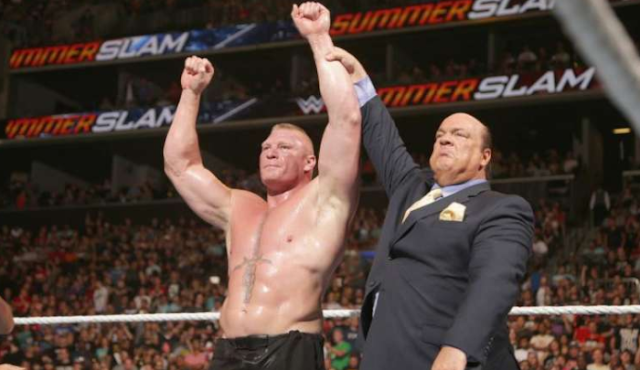 If you missed the SummerSlam controversial moments, just watch this quick video.

The match was between Undertaker and Brey Heart for the World Heavyweight Championship. Heart spits over Shawn Michael’s face and Shawn Michael took the chair but hit it to the Undertaker’s head.

Heart pinned the Undertaker and won the title.

Daniel O’Brien won the World Heavyweight Championship title and both Triple H and the Champion made a fun out of Mr. McMahon. However, at the end, Triple H made a Pede-Gary move to Daniel O’Brien and there comes the Viper to cash his Money in the Bank contract.

Also Read: Top 5 Twists That Can Happen At SummerSlam 2017

The match was between John Cena and CM Punk for the WWE Championship. CM Punk pinned Cena and Triple H counted it to three without noticing that Cena’s foot was on the rope. This cost Cena the title which he could have won.

This was the revenge time for the Undertaker after he lost for the time at WrestleMania against the Brock Lesnar. Brock Lesnar became the first wrestler to end the streak of Undertaker.

Undertaker made a comeback at Battleground and challenged Lesnar to a match at SummerSlam.

Undertaker did tap out but the referee didn’t notice it. The match was continued and Undertaker won the match with a submission move.

The match was between the Lesnar and Randy Orton at SummerSlam. Lesnar brutally injured the Viper with his elbow and the match ended in Lesnar’s favor since the Viper wasn’t able to fight.

However, the match was ended but Lesnar continued to attack Randy Orton. At last, Shane McMahon comes in the ring to save Randy Orton.

Lesnar made an F5 move to the McMahon and injured him as well.

I hope you like reading this post. Do let me know which is your favorite SummerSlam controversial moment.

If you ask me, it was the match between the Undertaker and the Beast.