On Monday night Raw, Kurt Angle made a huge announcement by announcing a fatal four-way match for Universal Championship.

The Raw General Manager was about to announce one name but got interrupted by Samoa Joe, Roman Reigns, and Braun Stroman.

At the end, he confirmed that Brock Lesnar will be facing all the three wrestlers in a fatal four-way match at WWE SummerSlam 2017.

This week on the Raw show, Kurt Angel invited all the competitors to face each other for a face to face interview, but it turned to be a fight at the end.

First, comes the beast who entered the ring and Paul Heyman made it clear again, if the beast lost the title at SummerSlam, he will walk out of the Raw show.

Right after the interview, Samoa Joe entered followed by Braun Stroman and the Big Dog, Roman Reigns at last.

Reigns speared the Joe and then Stroman attacked Reigns.

At last, the brawl was in between Brock Lesnar and Braun Stroman.

They both throw out the security and at the end, the other wrestlers had to come to sort out the matter between the two.

The Universal Championship match would be an exciting one at this SummerSlam and there is no doubt about it.

On last week’s Monday night Raw, Roman Reigns and Samoa faced each other for the number one contender match for Universal Championship. However, the match was interrupted by Braun Stroman and ruined everything. 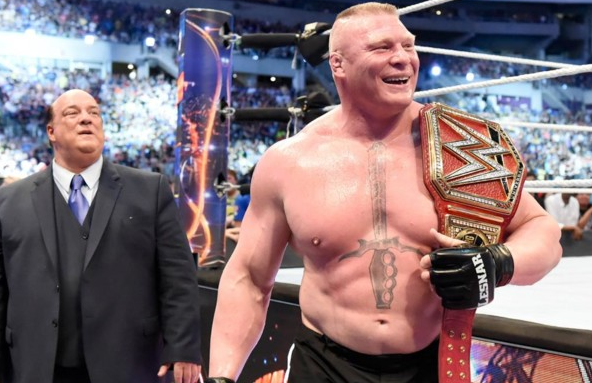 Kurt Angle made a promise that he will choose one name who will face Brock Lesnar at SummerSlam 2017. But it has to be a fatal four way now.

There would be a huge crowd for sure on 20th August at Brooklyn City, New York, when these four giants will face each other in the title match.

Will it be a final sphere from Reigns that will walk him out as a Champion?

Or will it be Samoa Joe or Braun Strowman. There is no doubt that Braun Strowman is a tough competitor and he can destroy any one as badly as he can.

On next week, after this huge blockbuster announcement, there would be a triple threat match between Roman Reigns, Samoa Joe and Braun Strowman.

This would be the 30th edition of this mega Pay-Per-View event SummerSlam and it will be held in New York city.