Aug 02, 2017 | By WWE Mania
Will AJ Styles defend his title at SummerSlam against Kevin Owens?

After a lot of drama happened between the match of AJ Styles and Kevin Owens on SmackDown this week, both the wrestlers will finally face each other again at SummerSlam 2017.

Kevin Owens lost his title to AJ Styles at BattleGround 2017. Right after that, he challenged AJ Styles to a rematch, which indeed turned out to be triple thread match as Chris Jericho made his come back. 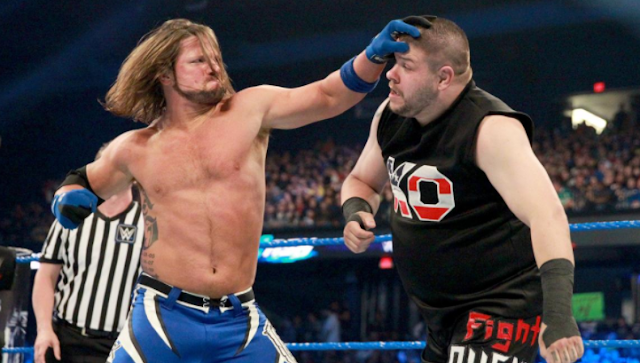 At the end, AJ Styles pinned Chris Jericho and retained his title.

Right after, Kevin Owens was hell angry and asked for a rematch for the title. AJ Styles accepted the challenge and faced Kevin Owens for the United States title.

Since the referee was hit by Ownes during the title match, he couldn’t notice that Ownes had his shoulder up when AJ Styles pinged him. As a result, Ownes had to lose the match and AJ Styles walked out as a champion.

Owens had a discussion after the match with SmackDown General’s Manager, Daniel O’Brien and Shane McMahon. After a lot of drama and argument, both of them decided to give a rematch to Kevin Ownes at WWE SummerSlam 2017.

That too, with a special guest referee (Shane McMahon) to avoid any slips during the match.

Don’t forget to watch the AJ Styles Vs Kevin Owens at SummerSlam 2017 for the United States Championship.

Styles already defeated Owens at a couple of times and surely he will successfully defend his title again.

Who you think will win the United States Championship?

Will be AJ Styles or Kevin Owens?

Do let us know your opinion in the comment section below.