Mar 14, 2017 | By WWE Mania
The long continued rivalry between Goldberg and Lesnar will clash again when the Beast will face the Universal Champion- Goldberg at WrestleMania 33.

Goldberg won the title at Fastlane 2017 when he defeated Kevin Ownes. Before that, Lesnar challenged Goldberg to a fight for the last time at WrestleMania 2017 which Goldberg accepted.

Goldberg has already defeated Lesnar at WrestleMania. Apart from that, Lesnar was brutally defeated at Survivor Series and then at Royal Rumble 2017, when Goldberg eliminated Lesnar from the ring.

This would be 2-0 for Lesnar if he gets defeated again by Goldberg. 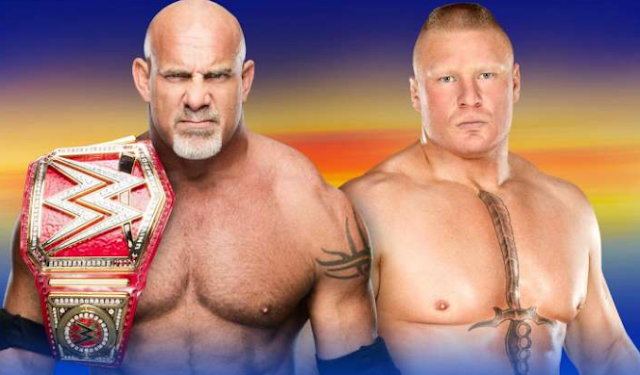 Watch Goldberg taking on Lesnar at WrestleMania 33 live on WWE Network on 2nd April 2017, Sunday at Orlando, Florida. This would be the thirty-third edition of WrestleMania by WWE. It’s the biggest pay-per-view event and all set to break the records this year.
Last Monday Night Raw, Lesnar came to the ring to congratulate Goldberg for the title. But smartly he F5 the Goldberg. Goldberg was down and wasn’t able to move. Paul Heyman made it very clear that this time his client Lesnar will defeat Goldberg and become the new Universal Champion.
Who you think will win? Goldberg or Lesnar.
Get ready to set the main event of WrestleMania 33 between Goldberg and Lesnar for Universal Championship Title.
Do create the buzz about the fight with hashtag #LesnarVsGoldberg.
If you like the post do share it with your friends and colleagues. Do mention your thoughts in the comment section below.
You might also like reading the following: