Another pay-per-view professional wrestling event of WWE – Royal Rumble 2017 and the first one of the new year 2017 is coming on January 29th, Sunday at Alamodome in San Antonio, Texas. This will be the second time when Royal Rumble will be held at Alamodome after 1997.

This would be the 30th edition of Royal Rumble, where wrestling stars of Raw, SmackDown and 205 Live will take part. The live streaming of the event will be available on WWE Network. 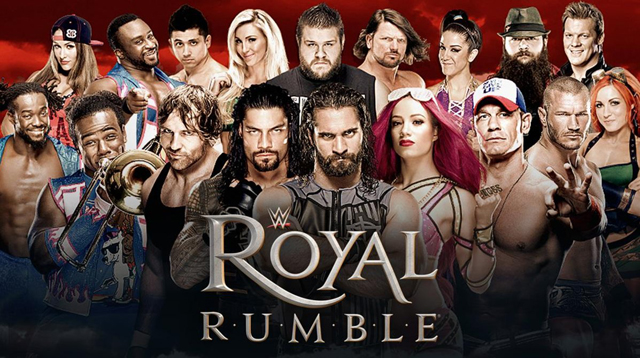 Superstars like Brock Lesnar and Goldberg are already confirmed to fight on 30-man Royal Rumble match for world championship match at WrestleMania 33.

Tha match cards and players that are already confirmed for Royal Rumble 2017 are as follows:

Kevin Owens (c) Vs Roman Reigns: Both the wrestlers will face each other again at Royal Rumble 2017 for WWE Universal Championship title. Chris Jericho will be out of the ring as he is suspended by the WWE Raw Manager McFoley to not interrupt between the match.

AJ Styles (c) Vs John Cena: John Cena made a comeback and challenged AJ Styles for the World Heavyweight Title at Royal Rumble 2017, on 29th January, Sunday. If Cena wins he will break Ric Flair’s record of holding most world titles.

Charlotte Vs Bayley: Charlotte will take on Bayley on Sunday defending her Women’s Champion title at Royal Rumble match.

Dean Ambrose Vs The Miz: The Miz has challenged the Intercontinental Champion Dean Ambrose at Royal Rumble 2017 for the title.