Jul 24, 2016 | By WWE Mania
The Beast will battle the Viper at Summerslam 2016. It’s an official announcement made by the WWE board committee on July 7th. The announcment for the battle was officially made at SmackDown

Having said that all the rumors of battle between Undertaker and Brock Lesnar, and Brock’s possible opponents like Kevin Ownes, Bray Wyatt are no longer to be believed. 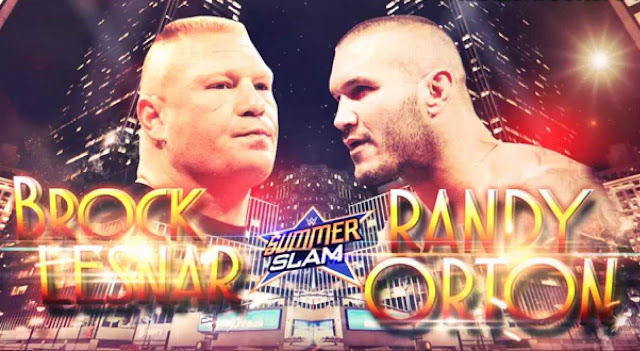 The 29th edition of Summerslam will be held at Barclays Center New York on 21st August 2016, Sunday. It would be a party night for the WWE fans as they gonna watch their favorite superstars live at WWE Summerslam 2016.

Randy Orton is returning to the ring after a long time, recovering from an injury. And what could be better than this, a test of fitness for the Viber to face one of the toughest guy in the ring, Brock Lesnar.

So, Randy Orton is going to the opponent for Brock Lesnar in Summerslam 2016 and it’s revealed now.

Lesnar had a fight in last Summerslam against the Undertaker and after a lot of drama, Undertaker managed to defeat him. Though from the vidoe clip, Brock defeated the Undertaker but match referee didn’t notice it.

Since then lots of things have changed. The Beast defeated the Undertaker at Hell In A Cell. And then at UFC 200 he was on a roll.

Brock Lesnar is popular for his moves like Suplex City, AA and others. He has won several titles like WWE Championship, UFC Championship and NCAA heavyweight wrestling championship.

Talking about Randy Orton, he is know for his RKO move, DDT. The last time, when both the fighters met each other was 14 years back.

Which means, the two of them have met only once, and this would be the second time when both the wrestlers will be facing each other in the WWE ring.

Randy Orton has won 12 World Titles and established himself a great WWE Superstar.

Watch this historic showdown between Brock Lesnar VS Randy Orton at WWE Summerslam 2016. The event will begin at 7 ET in US standard time.

The WWE Summerslam tickets are already on sale. Book it before the stock gets empty. Stay tuned for more updates.