WWE Money In The Bank: History So Far & Players Who Won It 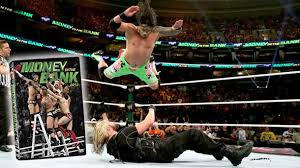 Around five to ten participants feature in the event fight to win the briefcase, which is suspended 20 feet above the ring. There is a contract for the briefcase which assures that the winner can cash it anytime for World Heavyweight Championship.

Who Is Behind Money In The Bank?

Chris Jericho introduced the idea to the General Manager Eric Bischoff way back in March 2005, and it began from Wrestlemania 21.

Here is the complete history of Money in the bank past events with the player names who won it.

CM Punk won the fourth Money in the bank ladder match by defeating the Chris Jericho over the top. The fighter at the end cashed his contract and defeated Edge to become the World Heavy Weight Champion.

Jack Swagger won the sixth Money in the bank at Wrestlemania 26 and become the World Heavy Weight Champion after defeating Chris Jericho.

In Feb 2010, the event became a separate pay-per-view edition and it was decided that there would be two money in the bank matches now, one for RAW and the other for Smackdown.

Kane won the SmackDown money in the bank which he later cashed in to defeat Rey Mysterio for World Havyweight Champion.

The Mizz wont the money in the bank at Raw and defeated Randy Orton to become WWE Champion.

The second pay-per-view money in the bank took place on July 17th, 2011. Alberto Del Rio from Raw and Daniel Bryan from SmackDown won the ladder matches. Del Rio after so many attempts, was to able to cash in the briefcase at SummerSlam against CM Punk and became the WWE Champion.

On the other hand, Daniel Bryan, after so many dramatic moments, was able to cash in his contract and defeated Big Show to become the World Heavy Weight Champion for the first time.

In the 3rd pay-per-view event Money in the bank, Dolph Ziggler won the ladder match at SmackDown. On 20th Episode of Raw, Ziggler faced Chris Jericho for Contract Vs Career match and defended the briefcase. Jericho was to leave the show.

Cena on the other hand won the title at Raw.