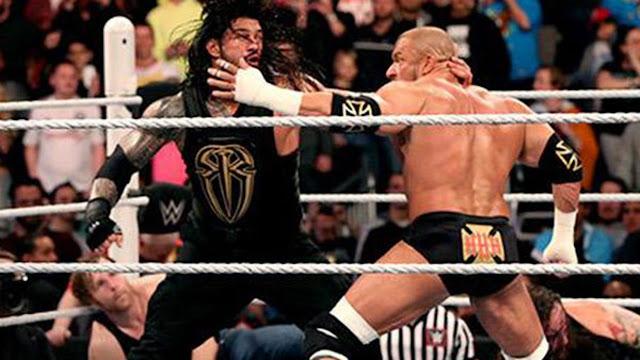 It’s time for Roman Reigns to repeat the history at Wrestlemania in a different style. As the super star will face Triple H at Wrestlemania 32 for World Heavy Weight Championship. Last time at Wretlemania 31, Roman Reigns faced Brock Lesnar for the title but sadly at the end Seth Rollins came into the play and cashed the money in back. He defeated Reigns at the end and took the tile.

Reigns fought well but left the ring without the title. This time, it’s his time again to take the title back from the Triple H at Wrestlemania 2016 at AT&T Stadium.

It would be interesting to see how both the wrestlers fight against each other.

Blood has been spilled and payback exacted, but at WrestleMania, one Superstar will emerge as the WWE World Heavyweight Champion.

As The Road to WrestleMania rounds its final bend, Roman Reigns finds himself, once again, staring down the finish line and the prize at the end of the run.

This time, however, it won’t be the unstoppable Beast Incarnate looking to deny The Big Dog, but current WWE World Heavyweight Champion Triple H, the unyielding figurehead of The Authority and the man who effectively snatched the title from Reigns in the closing moments of the 2016 Royal Rumble Match.

That Reigns got back to this stage is remarkable enough: The tests he’s gone through since his Royal Rumble Match victory in 2015 would have caused a lesser Superstar to tuck tail and run. If nothing else, Reigns’ ability to plow past Lesnar and his best friend Dean Ambrose (again) at WWE Fastlane to earn the match with The Game should serve as proof to even his staunchest detractors that he’s made of stronger stuff than many gave him credit for this time last year.

Need further evidence? After The Cerebral Assassin mercilessly ambushed The Big Dog on the Feb. 22 edition of Raw — shattering the challenger’s nose with a Pedigree onto steel steps — Reigns was forced to undergo emergency nasal reconstruction surgery the following day.

But rather than back down to The Authority, Reigns surged forward with greater ferocity, returning three weeks later to surprise The Game with a retaliatory attack. The wild brawl sprawled through the arena and was only halted when The Usos, Mark Henry and other Superstars pried Reigns off The King of Kings. Alas, the damage had already been done: As a result of the fistfight — which saw Reigns smash a TV over The Game’s back — Triple H received six staples in his head and needed to have shards of glass removed from his back.