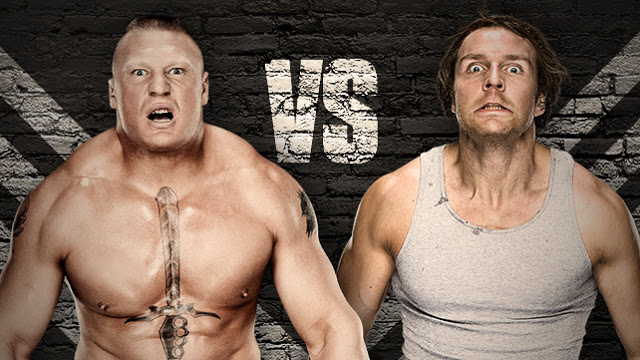 Dean Ambrose will take on the beast at Wrestlemania 32 at No Holds Barred Street Fight.

If we’re to be realistic, no one should be able to stand toe to toe with Brock Lesnar and have a chance to survive, let alone win. The Beast is not just a fancy moniker given to him by his advocate Paul Heyman to scare potential opponents. It is a name that’s been earned by those left in the wake of his destruction.

Brock has destroyed John Cena in a one sided match the likes the 15 time champion has never experienced. He’s slain giants such as the Big Show. He did the impossible and beat Undertaker at WrestleMania. (And he did it with relative ease!) So why, when all those men have larger resumes with more accomplishments and are of a larger physical stature, is Dean Ambrose the perfect man to face Brock Lesnar?

Simple. It’s because Dean Ambrose is built for this. He may not be physically built to stand toe to toe with the Beast, but mentally he is the best prepared. For his entire life, all Dean has done is get back up. Prior to pro-wrestling, had to fight to survive growing up on the streets of Cincinnati, as he discussed on his most recent return home.

The early days of his career were spent fighting in brutal hardcore wars in CZW. The only way to even survive those matches was to train himself to get back up no matter how much damage his body had sustained nor mental anguish he’d endured. In WWE he had to face emotional hardship when one of the few men he considered a friend stabbed him in the back and then physical hardship as their friendship turned into brutal battles between enemies. Unknown to him throughout all that time time, it was all training to face Brock Lesnar in a devastating match on the biggest stage there is.

The announcers constantly call Ambrose “crazy” or a “lunatic” and usually that is just because they don’t understand how this eccentric man ticks. However, to ask for a street fight with Brock Lesnar at WrestleMania you need to be a little insane.

After Fast Lane, where Roman Reigns defeated Dean Ambrose and Brock Lesnar to become number one contender, Brock blamed Dean because Dean was the man to get pinned that match. And when Brock blames someone for anything, he doesn’t sit down and discuss it. No, he beats their ass all over a parking garage.

Ambrose’s grit and passion draws parallels to another beloved fighter, albeit fictional: Rocky Balboa. Rocky may not have been the most talented fighter nor the most cunning athlete. But growing up on the streets of Philadelphia fighting to survive, much like Ambrose did in Cincinnati, toughened him to a point that he could stand up to more accomplished athletes. And even if Rocky didn’t win, always got back up. Even Ambrose’s sojourn into the desert above is a bit similar to Rocky’s training in Siberia. (If Brock Lesnar were to have an comparison in that world, it would be the imposing athlete Ivan Drago… and yes, that would leave Heyman as Ludmilla.) Whether it be the fictional fighter Rocky or the real athletic Ambrose, their never ending determination wins them the hearts of the fans, even if they lose the fight in front of them.

It’s obvious that Ambrose will not give nor will he ever say die. As long as he has an ounce of life left, he will scratch and claw to get back up. Will he be able to outlast the inhuman athlete Brock Lesnar? Can he use his experience with struggle to gain an advantage? There’s no doubt that Ambrose will get back up at the end of the match. But will it be well after he’s been defeated? Find out tonight at WrestleMania 32.