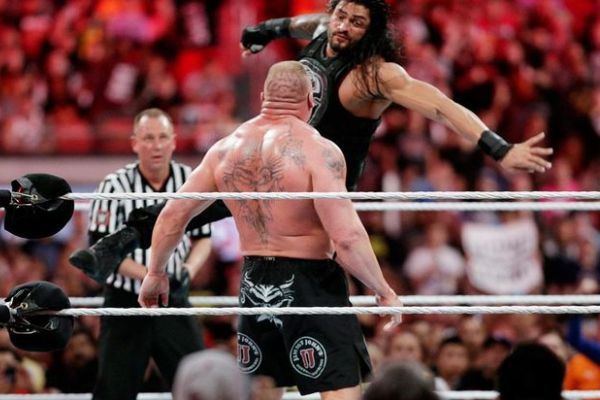 WWE Wrestlemania 2016 is considered to be one of the biggest events in WWE history. This would be the 32nd edition of Wrestlemania which is scheduled on 3rd April, Sunday at AT&T Stadium in Arlington, Texas, US.

The WWE main event will kickoff at 7 PM EST/4PM PST.

It’s a WWE Network pay-per-view (PPV) event and the live streaming of Wrestlemania 32 would be available on WWE Network, WWE.com, YouTube, WWE App, and on other platforms.

WWE Wrestlemania Rumors: If rumors to be believed then Rock may show up at Wrestlemania 32 but his role at main event is not known.

Also Chris Jericho is predicted to face off with AJ Styles, Kevin Owens with Sami Zayn. The matches at Wrestlemania 2016 are as follows:

Triple H vs Roman Reigns: Roman Reigns may have his moment again at Wrestlemania 32. The last time, the wrestler faced off Brock Lesnar at Wrestlemania 31, which he lost at the end after putting up a great fight against the beast, due to interuption of Seth Rollins who used Money in the Bank contract and defeated the Roman Reigns to seal the World Heavy Weight Championship.

But this time, after so much of hard work and some great power, Reigns is all set to have his moment, at Wresltemania 2016.

The Reigns have conquered some serious battles at Royal Rumble, Fastlane and now the No. 1 content for the title.

Both have some fight earlier at Monday Night Raw, where first Triple H destroyed Reigns face and later Reigns destroyed the Game.

On Sunday, at Wrestlemania, the fight between these two rivals will decide who will be the World Heavy Weight Champion.

Later at Raw, the two wrestlers, Dean Ambrose and Brock Lesnar had a fight and Dean challenged the beast and he accepted it.

Which means Shane McMahon will rule the WWE Raw show. If Shane loses, he would no longer can demand for RAW.

The two wrestlers will face each other inside Hell In A Cell match on Sunday at Wrestlemania 2016. This would be the main event of Wrestlemania 32.

Other Matches to watch out at Wrestlemania 32: