Roman Reigns made a come back to WWE Monday Night Raw, on 14th March 2016 and surprised Triple H. As soon as the match between Triple H and Ziggler ended, Roman Reigns arrived at the ring and start fighting against Triple H.

Both WWE Stars, Triple H and Roman Reigns will have a fight for WWE World Heavyweight Championship at Wrestlemania 32

Roman Reigns put up a fight against Triple H and destroyed him badly. Here is the video of Roman Reigns Vs Triple H WWE Fight on Monday Night Raw, 14th March, 2016.

The count down begins for Wrestlemania 32. The main event of WWE is gonna take place on 3rd April. Yesterday, 22nd Feb 2016, WWE fans witnessed Monday Night Raw where Triple H had a cold fight with Roman Reigns and destroyed his face.

How Roman Reigns Was Destroyed By Triple H?

The main event of Monday Night Raw was between Sheamus and Roman Reigns. Sheamus again comes with the company of his partners and put up a fight against Roman Reigns. Almost the match was about to end, when Triple H made his way out to the Ring. Roman was already tired as he was managing not one but four persons outside the ring.

However, Reigns put up fight against the game. But at the end it was Triple H who dominated. The WWE World Heavyweight Champion Triple H and No. 1 Contender Roman Reigns brawled.

They went around ringside until the Game got the upper hand and shot the chair to the Roman’s face. He bashed the former Shield man’s head into the announce table about a dozen times and hit a Pedigree on the steel steps to end the episode.

Reigns bleeding profusely was the most noticeable thing about the segment. WWE doesn’t let their talent intentionally bleed, or “blade”, which is using an object to cut your skin open so blood comes out. This has been done before to add effect.

Before the main event, when Roman Reigns was making his way towards the ring, a fan tried to throw beer at him.

Well, it doesn’t seem that Reigns bladed or was unintentionally cut open by Triple H. So how did he bleed?

A blood capsule being used is on Reigns is to draw sympathy. This has worked on dozens of occasions in the past, most notably for Stone Cold Steve Austin at WrestleMania 13 against Bret Hart. It featured a double turn where sympathy was built for the Rattlesnake. He was busted open early in the match and it added something extra when he went through the emotional moments of the match.

Unfortunately for WWE, the Detroit, MI crowd was not having this. They booed Reigns from start to finish and cheered Triple H during that time span. There is some fixing to be done on this, but whether that actually happens remains to be seen.

Referees came out to stop the madness and clean Reigns up, who had a crimson mask.

Afterwards, Roman would take to Twitter to comment on the beating and posted a picture of how he looked afterward. 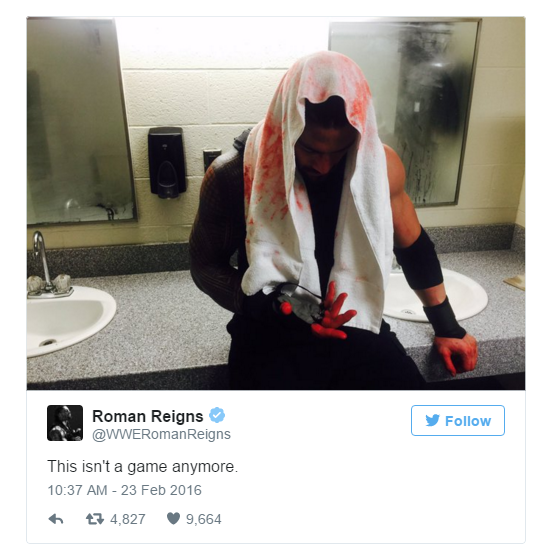 Here is the more that you should know about WWE Monday Night Raw Review. It’s gonna create a lot of buzz in Wrestlemania 2016.