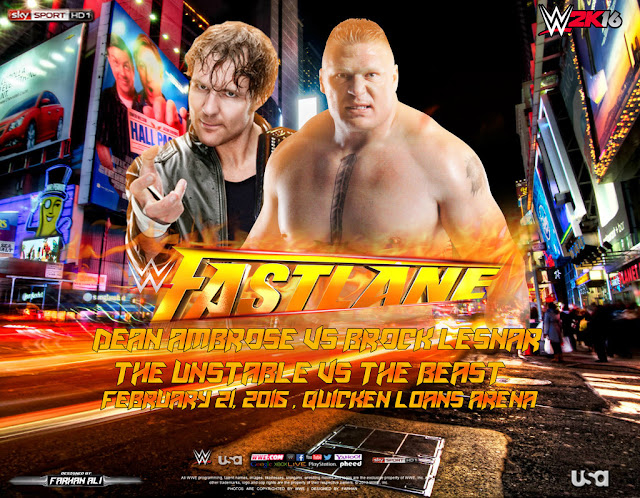 WWE Fastland 2016 is around the corner. Only few days left for the BIG event of WWE. Some of the BIG stars like Brock Lesnar, Dean Amrose, Chris Jericho, AJ Styles, Roman Reigns and others will be seen on WWE Fastlane 2016.

WWE Fastlane is the strongest on cards, as WWE is focusing a lot on promoting the main event before the Wrestlemania 31.

BIG matches like Triple thread match between Brock Lesnar VS Dean Ambrose VS Roman Reigns for #1 contender for World Heavy Weight Championship is on buzz. Whoever is gonna win that match, will face Triple H for WWE Championship at Wrestlemania 2016.

Other matches that’s gonna take place on Fastlane 2016 are Kevin Owens versus Dolph Ziggler, Chris Jericho versus AJ Styles, usually a combination of stars from WWE Raw and Smackdown.

Apart from that, Charlotte defends her Divas Title against Brie Bella, and the card is rounded off with Becky Lynch and Sasha Banks versus Naomi and Tamina.

Ryback, Big Show and Kane versus Braun Strowman, Erick Rowan and Luke Harper is the bathroom break match, while Alberto Del Rio versus Kalisto makes for a stronger than usual pre-show bout. Here’s the results you can count on.

Below is the list of Fastlane 2016 matches along with predictions:


Prediction: Who will win: Roman Reigns